We are selecting all the players from the Punjab Kings squad for this game.

The eighth game of this 2021 IPL season kicks off at 7:30 p.m. IST between the Punjab Kings (PBKS) and the Chennai Super Kings (CSK) in Mumbai. In this article, let’s talk about the Season Long Fantasy League squad setup for Game 8.

So far, we haven’t been in favor of too many transfers for a game. However, we will be making four transfers (+ one uncapped) to our Fantastic Squad of the Season for this game. In fact, we save transfers from previous matches, to use them in these kinds of matches. Let’s see why.

Kings of Punjab play two games in four days. The next match (match 9) is between SRH and MI. We already have four players from SRH and MI on our fantastic squad. After Game 9, SRH took a five-game hiatus and MI took a four-game hiatus. So we don’t want to make any transfers for Game Nine. With all this logistics, we can easily transfer the Punjab Kings players to their next game.

Until now, Mumbai has been a hitters’ paradise. However, in the last game between RR and DC, the bowlers did very well too. For this game, we will only have players from the Punjab Kings Team on our fantastic squad, and will include players from the batting and bowling departments.

Players available for the current match: Nothing

Number of transfers: Four (+ one uncapped)

Sanju Samson (RR), Manan Vohra (RR): RR has a five-game gap for the next game. Thus, all RR players can be transferred.

Shikhar Dhawan (DC), Prithvi Shaw (DC): DC will play its next game in four games. And we won’t be able to transport these players before this game. So all DC players can be transferred.

KL Rahul (PBKS): We know how much Fantasy teams suffered from not going with KL Rahul in the last game against RR. We cannot afford to play Punjab games without KL Rahul in our fantastic squad.

Mayank Agarwal (PBKS): Mayank Agarwal disappointed in the last match. If he rediscovers his mojo from last season against easier bowling attacks like CSK on hitter-friendly surfaces like Wankhede, it will rain some fantasy points.

Chris Gayle (PBKS): Chris Gayle is unpredictable. Even if he stays in the fold for a short time, we will get a minimum of fancy points from him. Against less threatening bowling attacks like CSK, we only wish it would stay longer and blow everything up.

Jhye Richardson (PBKS): Jhye didn’t live up to expectations in the last game and Mohd. Shami was great. So our first choice was Shami. However, we were unable to accommodate Shami in our fantastic team as it costs 0.5 credits.

Here is our Fantasy team: 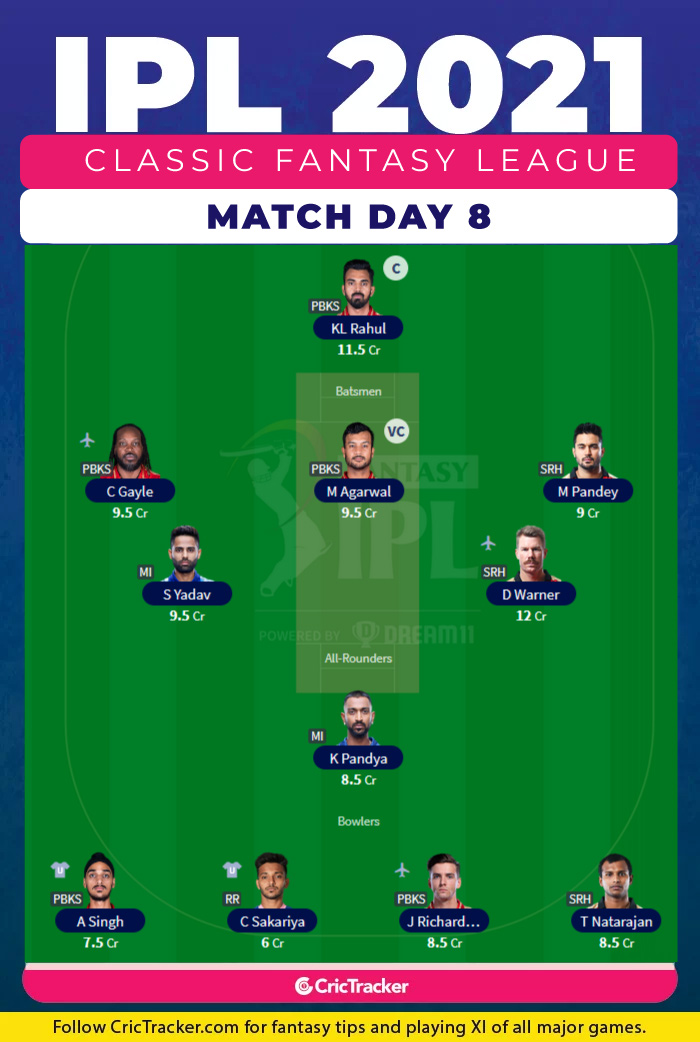 Arshdeep Singh (PBKS): We were one of the top three drummers on our fantastic team. It’s good to add bowlers to the fantastic team. Arshdeep had a good outing in the last game against the Rajasthan Royals.

To note: There may be slight changes to the Fantastic Squad depending on the teams announced after the toss and any other news.

Disclaimer: There is no one perfect model for playing Fantasy League. Understand that this is our way of playing the game. We provide the rationale for our player selection and strategies, which you may or may not agree to. Just understand the key information from the article and play it your way and have fun.